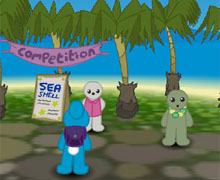 The Super Flash Brothers have made a name for themselves as fabulous Flash game designers, and BR's Climate Chaos is one of their most highly-regarded games. Fire it up, and it's easy to see why. The world of Climate Chaos is beautiful and well-animated, the original in-game music is well-produced, and--perhaps most importantly--the in-game engine is nothing short of astounding. As of the time of this writing, you won't find many examples of a better 3D game engine in Flash.

You will feel immersed in a strange land when you Climate Chaos. Characters all speak a foreign tongue that you will have to decode through icons that pop up in speech bubbles. The cut scenes, which are frequent, are well-animated and funny. These add a lot to the atmosphere and character of the game as well.

Now, having gotten all of that out of the way, I'm going to go ahead and make a lot of people very angry by announcing that I think this game is overrated. Why? In a word: gameplay. Gameplay is why we play games to begin with. If a game is fun, it doesn't matter that it's ugly, or that it has no plot or character. And if a game isn't fun, then it doesn't matter how remarkable its production values are.

Climate Chaos, unfortunately, falls into the latter category. Once the novelty of running around in a 3D world in Flash wears off, there's really remarkably little to keep the player's attention. You can run around performing tedious quests such as "fetch me 20 seashells," or you can talk to every character and try to figure out what they're saying, looking for the one person who will advance the nearly non-existent storyline. And...that's about it, really. The bottom line: Climate Chaos is a great technical feat, but once the novelty of the game engine wears off, there's not much there.