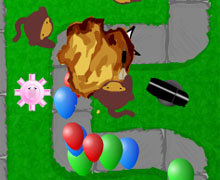 Bloons Tower Defense takes a new tack (pun intended) on the tower defense genre, creating a surprisingly refreshing and streamlined play experience. Like many tower defense games, Bloons TD doesn't even bother with the pretense of a plot. All you know is that you are charged with hiring dart-throwing monkeys and other puncturing, exploding, and freezing contraptions to destroy 50 waves of balloons before they reach the end of your path. Simple enough.

Those of us familiar with tower defense games know that enemies typically become stronger with each wave, getting more hit points and gradually becoming all but impervious to any towers you haven't been upgrading to keep up with them. Not in Bloons Tower Defense! More difficult enemies can still be popped with one hit--the problem is that like Russian matryoshka dolls, they have more bloons hiding inside of them that must also be popped. The result is a game you can literally win by just placing down a bunch of the most basic tower. Some people don't like that, and admittedly, Bloons Tower Defense is definitely on the easy side.

Dom Says:
Anyone who is a fan of the Bloons games will like this, other than that it is a mediocre tower defense game.
7/10 - "The 2nd one isn't that great either"